WARNING: This chapter deals with themes like racism and bullying. If you feel uncomfortable, just leave.
One year later...
Pleasantview have never been so calm and quiet. No news about murders or violence, and especially that girl, Kaylynn, was really strange. Always at her house, alone, apparently doing nothing crazy, dangerous or illegal. She seemed to be doing good. Was that about to change?

No, it couldn't be real. His mom couldn't be dead. She had to be somewhere, waiting for him with her arms open. She couldn't be gone forever. How was he going to survive? What if daddy falls in love with another person and forgets mom forever? Now without mom, there was an empty space in the family, an empty space in his heart. And nothing could ever fill the space.
*
Darleen had always wanted a funeral has it "should be". All her closest ones should be in the church and do a speech in her memory, and then she would be buried in her backyard. Dirk wanted to go, but his dad wouldn't let him. Mortimer agreed in taking care of him and Alexander while Darren was in the funeral. Dirk went for the Goth Manor's living room, where Alexander was sitting.
- Hi friend... how are you? - Alexander runned for his friend. Tears flowed on Dirk's face.
- My heart has an empty space and no one can fill it - Dirk cried.
- I know how it feels... I mean, my mom disappeard two years ago and she hasn't returned yet... I'm not sure if she will ever return to us... If we will be a full family again... - Alexander shed a tear. Dirk hugged him and they cried togheter.
- This is weird... - Alexander said.
- What?
- Everytime I talk about my mom, I freeze and I'm afraid everyone will start telling me to get over this, like it's easy to get over your own mom - Alexander explained - You're the first person that understands me, you even hugged me!
- I know how you feel... Once one of your parents is gone forever, it leaves a broken heard that is never completely fixed. You need someone who cares about you to carry on, you need a friend - Dirk said.
- You are my friend... - Alexander held Dirk's hand.
- I am, and you're my friend too... - Dirk drew a smile in his face.
- And we'll be always here for each other, right? Whenever you need a friend, remember you have me and you'll always have - Alexander said. Dirk kissed his friend's cheek.
- You'll always have me too...

( You are about to view content that may only be appropriate for adults. )

( You are about to view content that may only be appropriate for adults. )

-Our story starts in a sunny day, in the Goth Mansion-

71 years ago, Gunther Goth arrived at the town which would be called Pleasantview, and there he had a son, named Mortimer. Now, with 51 years old and carrying the fact that he was the only son of the Pleasantview founder, Mortimer Goth was drinking a coffee before go to work. He was the scientist who created the Elixir of Life. He got famous because of that. Despite the fame and the money, Mortimer wasn't really happy. His wife, Bella, disappeard a year ago and nobody have seen her again. There were some rummors that she were kidnapped by aliens. Mortimer was thinking about her when his carpool appeard. 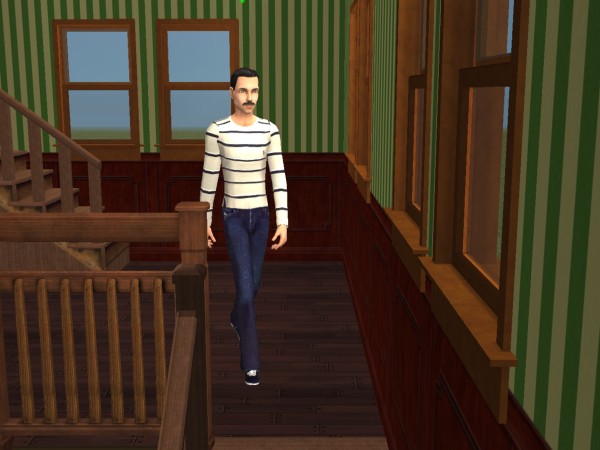 - CASSIE! - he screamed - I'm leaving. Take care of your little brother!
- OK DAD!! - Cassandra screamed. Cassandra was Mortimer and Bella's daughter. She was 22 years old and her brother, Alexander, just turned 6. Cassie was in her father's bedroom, with her brother. 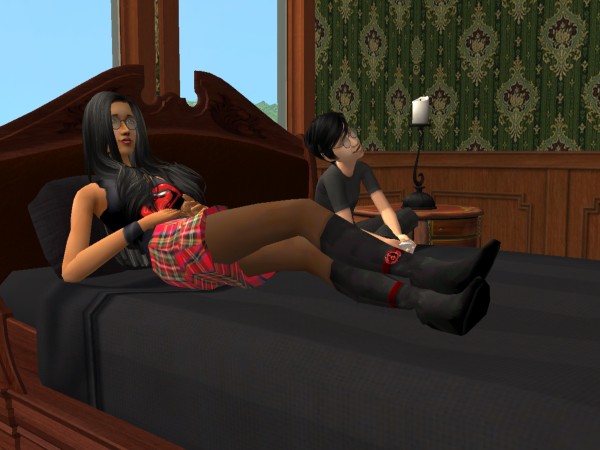 - Why daddy is always working? - Alexander asked. He missed to spend time in family, like when his mom was with them.
- Daddy has to work to earn money for us to buy things and travel - Cassandra explained to her little brother.
- But I miss him! - Alexander cried softly.
- Don't cry, lil bro, he will be back at 7 p.m. and so he can play with you - Cassandra comforted her brother. Suddenly, the doorbell rang.
- Who is? Who is? - Alexander got excited.
- I'm gonna see.
Cassandra ran to the door and opened it. A smiling woman greeted Cassandra. 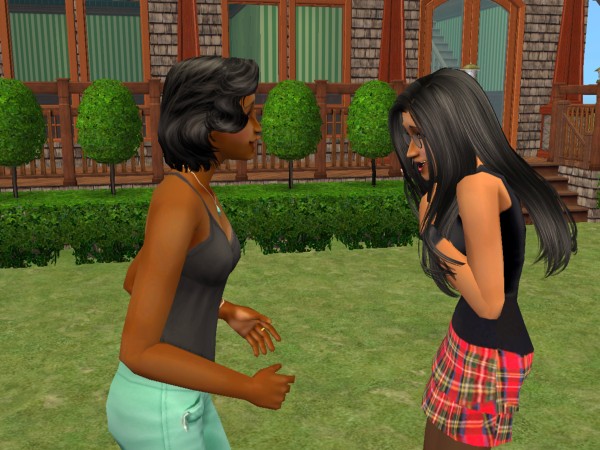 - Cassie! - she exclaimed - My friend!
- Darleen! Come in! - Cassandra answered. Darleen Dreamer was her neighboor and her friend. She and her family were emigrants from Mozambique and Darren was working at the same enterprise as Bella, Cassandra's missed mother. Darleen entered with Cassandra and they started talking.
- So, do you have some news? Is your family OK? - Cassandra asked.
- Yeah, it's all good. Guess what, my son is just like his father! He wants to be an artist! - Darleen told.
- Who, Dirk? Oh, I haven't seen him since he was a baby! How old his him now?
- Well, now he's 7 years old, and he will complete 8 in May.
- Just 2 years older than my brother - Cassandra observed.
- Maybe you can go to my house tomorrow, with your brother. The boys can play and we can talk. My husband would like to see you - Darleen invited.
- Ok, we'll go. Alex has been complaining that he has noboby to play with, so he will like to see your son. 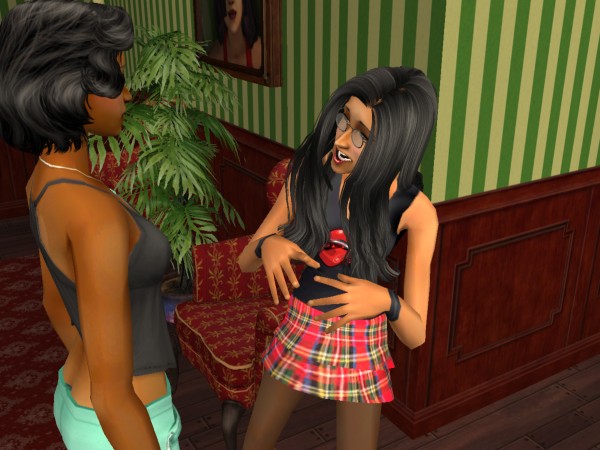 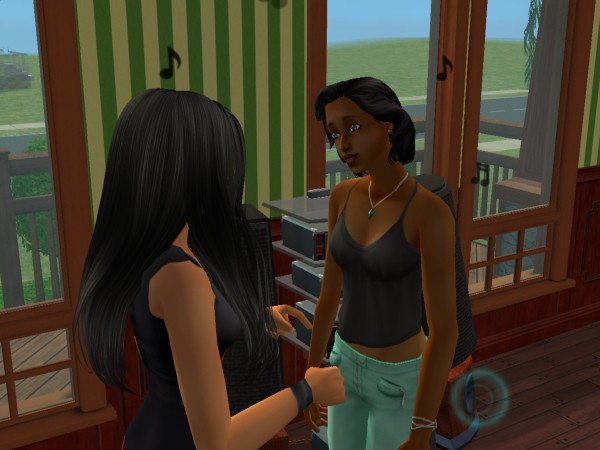 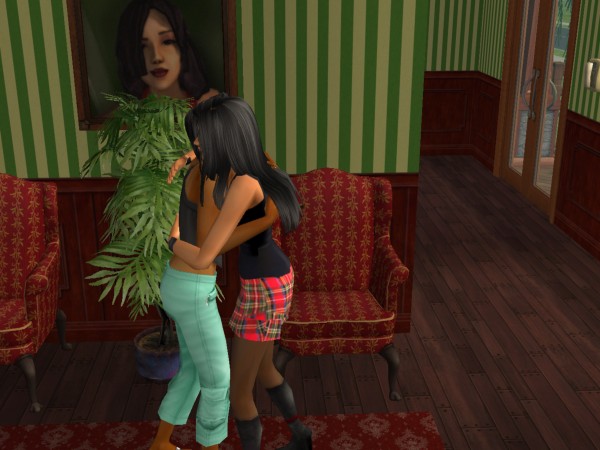 Darleen left the house and Cassandra sat in the sofa. A few minutes after, her dad arrived at home.
- Excellent day at work - Mortimer exclaimed - Cassie? Alex?
He found Cassandra at the living room and kissed her check.
- Good afternoon, honey? Where's your brother?
- Probably in his bedroom, playing - Cassandra answered.
- Good for him.
Cassandra got up.
- Darleen was here. Tomorrow I'll visit her with Alex so he can play with Darleen's son.
- Well, he needs to play with other kids. He is still so sad with mom's dissapearance... - Mortimer nodded.
- Just like you, dad. 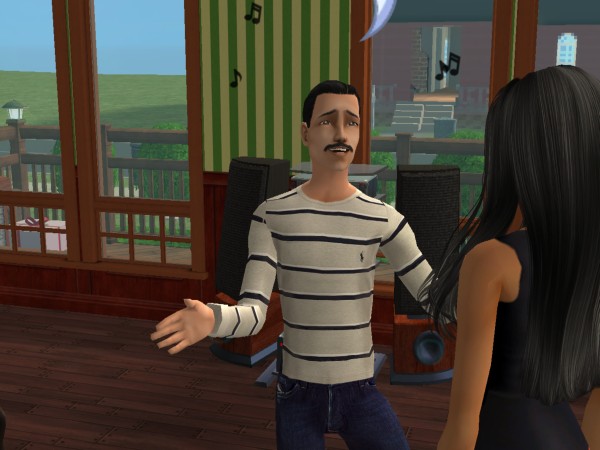 - Go kiss Darleen and Darren - Cassandra said to her brother - Show them you're a well-behaved boy.
Alexander obeyed her sister and then Dirk appeard at the yard.
- Hi Alex! You've grown since the last time I saw you!
- I'm just 6 years old...
- I'm 7, so, we are almost in the same boat - Dirk answered. 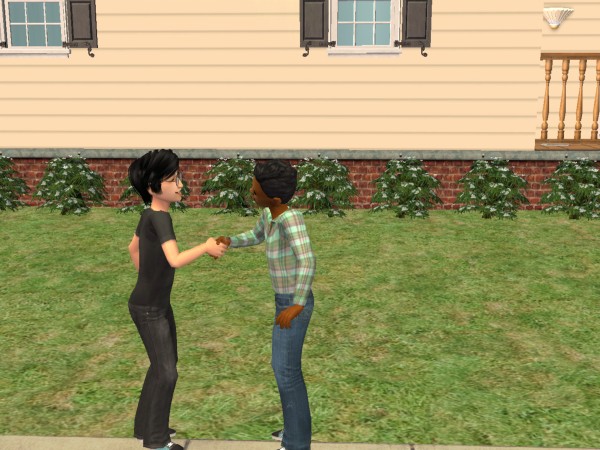 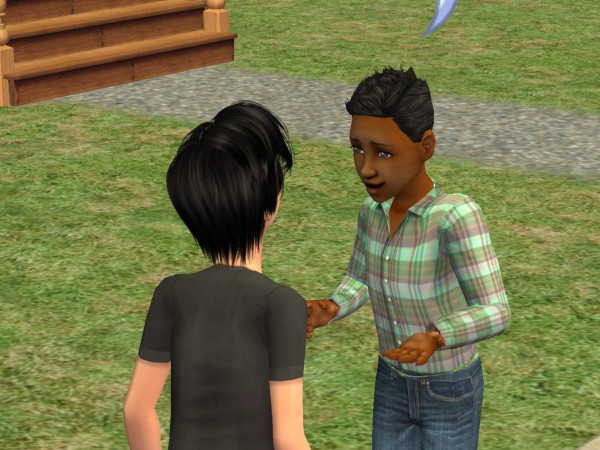 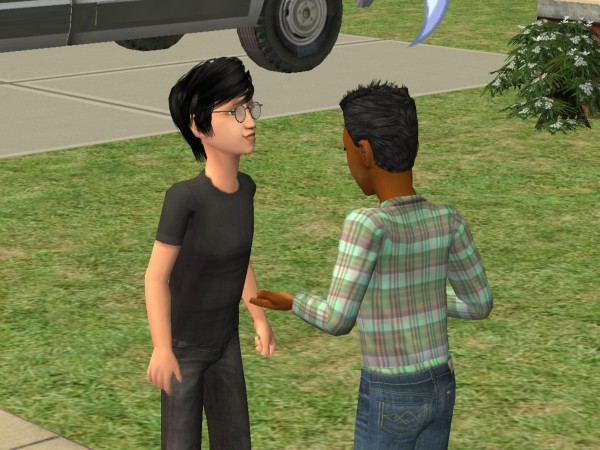 - So, let's play something? - Alexander suggested.
- Sure!
Meanwhile, the adults were inside, talking. 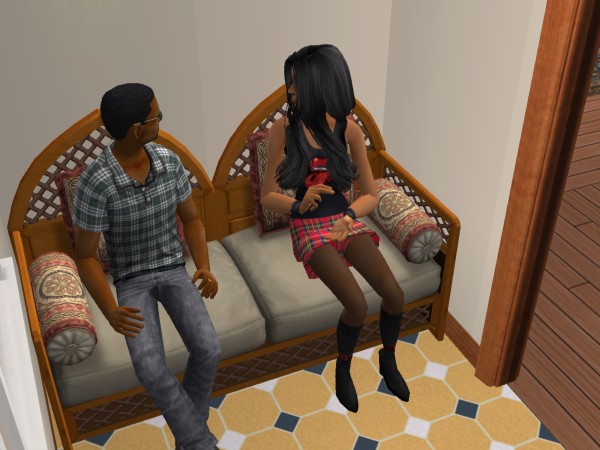 - So Cassandra, I heard that you are dating that boy, Don Lothario. Is that true? - Darren asked.
- Yes... - Cassandra said. Darren noticed that she was a bit sad.
- Are you ok?
- Not much.
- Why? - Darleen asked - If Don hurted you, I'll kill him personally! 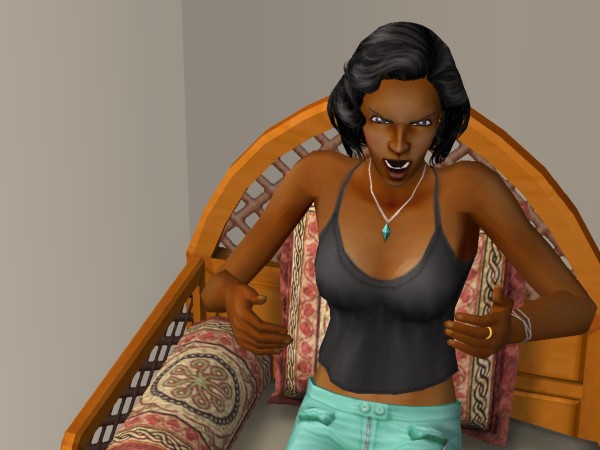 - Keep calm, Darleen. He didn't hurt me, he's just a bit hypocrite sometimes...
- Why? - Darren asked.
- Well, I always have to look gorgeous and hot for him, but not to much, because he doesn't want other man to look at me. He always gets mad at me if I talk with other boys, but he's always hanging out with lots of beautiful girls... - Cassandra told.
- Cassie, you don't deserve an asshole like him! Sorry, but if I was you, I would break up with him now!! - Darleen exclaimed, wroth.
- I can't do that, I'm not fearless like you, Darleen - Cassandra told, ashamed.
- So just tell him he have to respect you. And if he breaks up with you, don't be afraid, you just win in "lose" a boy like him!
- I'll do it. Thanks Darleen - Cassandra thanked - But now it's late, I have to go. My dad already called me three times...
- Thank you for your visit! - Darren smiled. 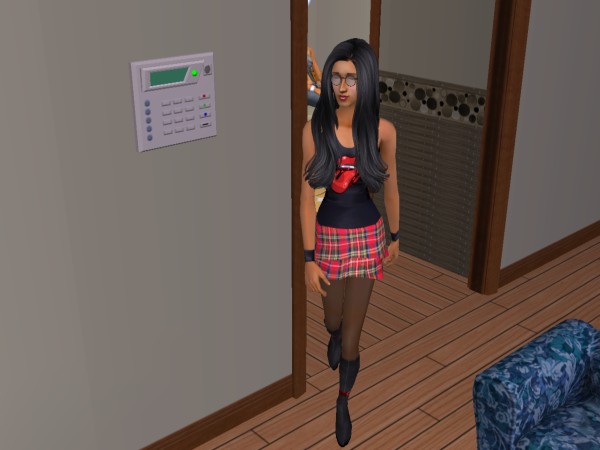 Cassandra walked toward the door and called Alexander.
- Alex!! We have to go!
Alexander was still in the yard, playing with Dirk. 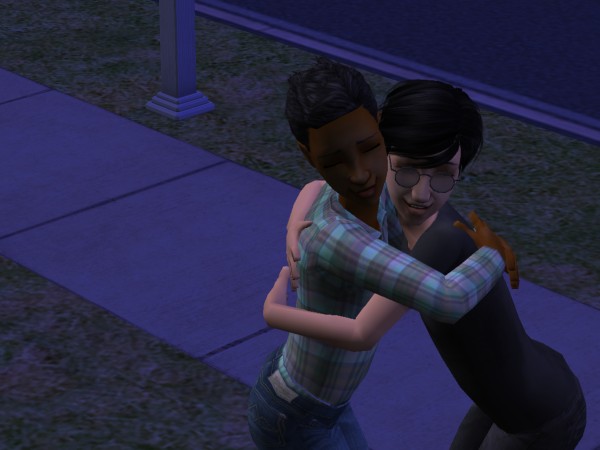 - Goodbye Dirk - Alexander hugged his new friend - Thank you for playing with me!
- You're so funny... I never had a friend like you - Dirk told him.
- Well, now you have me. You can play with me whenever you want. 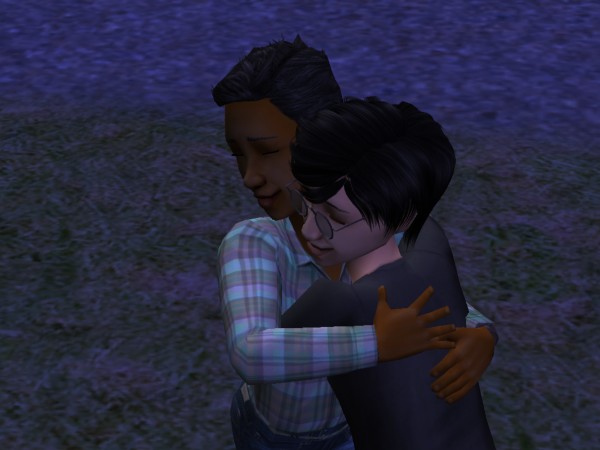 - Bye, Alex - Dirk greeted - Take care.
And the Goth siblings leave the Dreamers' house. "Nice to meet you, friend" Dirk got excited to have someone he can call "friend". Before Alexander, Dirk had no friends. The other kids didn't understand him. He was a sensible boy who hated violence, and the other boys enjoyed to play violent games and being violent for each other. But Alex, he was different. And he would be the best friend Dirk ever had...
By the time Dirk went to his bed, his parents also were in their bedroom, talking. 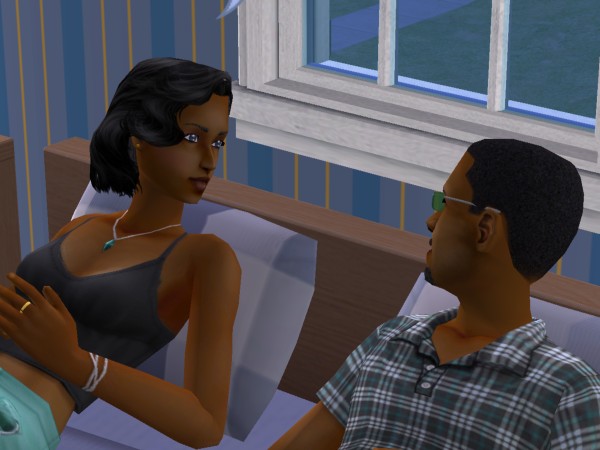 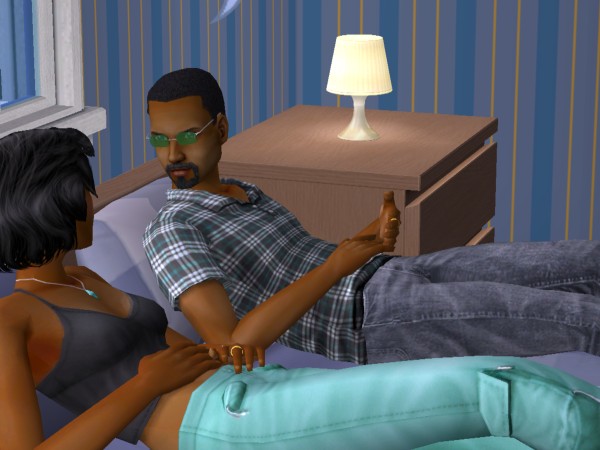 - Cassandra is a really nice girl - Darren commented - That Don Lothario don't deserve her.
- Unfortunately, love blinded her... She can't see that he's a stupid machist - Darleen added, convinced.
- Cassandra is intelligent, she will find it sooner or later! - Darren said.
- That's right. At least I have you instead of a Don...
- I love you, darling - Darren cuddled his wife. 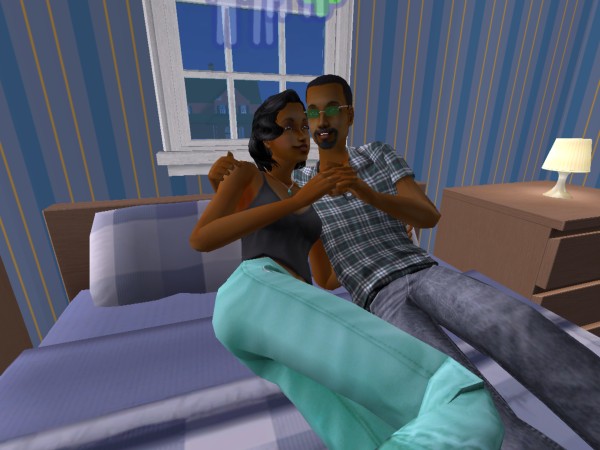 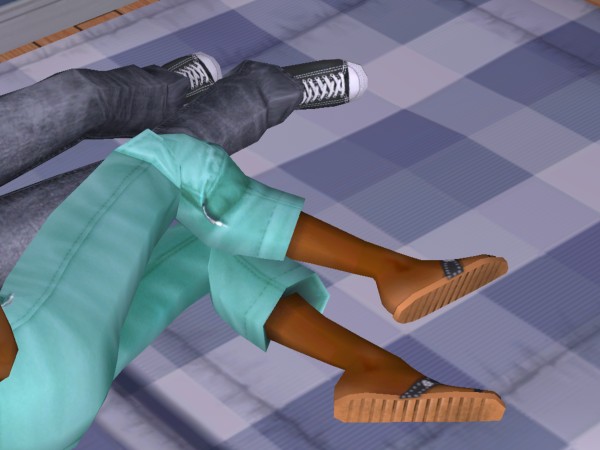 - I love you too, sweetie - Darleen answered.
Darren kissed her. 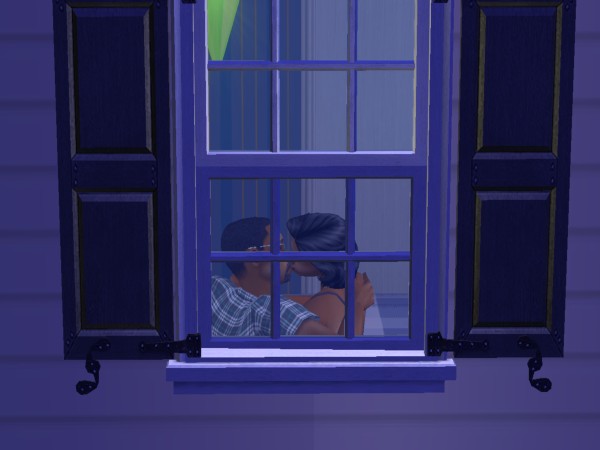 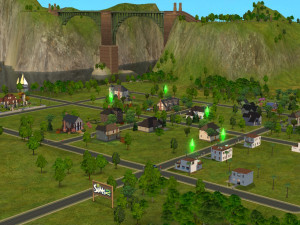 Pleasantview. A peaceful town with a peaceful story... or no. In fact, Pleasantview is everything but peaceful. Before and since Bella Goth's case, a lot of secrets, lies and stories have been present in the town. And they are about what? Guess what... LOVE. Love is something that have lots of meanings, and that's what rock out the people in Pleasantview. So, are you ready?